The tradition of royal women having “ladies-in-waiting”, a role which was close to Queen Elizabeth’s heart, will likely be abandoned by Camille as she takes on the role of Queen Consort.

Following the Queen’s deathseveral of the late monarch’s ladies-in-waiting were seen looking sombre as they bid their final farewell to Her Majesty at her funeral.﻿

Throughout her long reign, the Queen handpicked a close-knit group of women who helped her carry out day-to-day tasks; from organizing her diary to helping her pick out outfits. They became more than just staff, but rather close companions.

As Camilla takes on the newly appointed role of Queen Consort, it is expected that she will not follow the same traditional royal staffing arrangements that the late Queen had.

In an interview with Expressroyal historian Marlene Koenig speculated Camilla may decide not to have a lady-in-waiting, saying, “There are some positions that may no longer be filled.”

“You wonder if the women, especially Queen Camilla, will use ladies-in-waiting as the Queen did. She’s never had, even as the Duchess of Cornwall, an official lady-in-waiting.”

Throughout her time in the royal family, Camilla has had one former secretary, Angela MacManus, who fulfilled the role of lady-in-waiting but was never officially named.

As the monarchy adapts and grows with modern society, senior royals like Camilla may choose to inch away from traditions like this which may be considered outdated.

In the later years of her life, there were several traditional royal roles the late monarch had started to steer away from.

Following the death of the Mistress of the Robes, Fortune FitzRoy, the Queen never found a replacement, seemingly suggesting the role had come to a close.

In addition, Angela Kelly, the Queen’s personal dress maker, will step down from her role in the palace following the late monarch’s death.

﻿Koenig believes there will be changes moving forward, as royal women adopt a more modern approach and “have someone who assists them” rather than “waiting” on them.

The shift has been highlighted in the staffing choices of newer members of the royal family, like Kate Middleton and Camilla, who both turned down the offer to have a lady-in-waiting.

This starkly contrasts the choices of earlier royals such as Princess Diana, Princess Alexandra and the Duchess of Gloucester, who all had a lady-in-waiting.

For a daily dose of 9Honey, subscribe to our newsletter here. 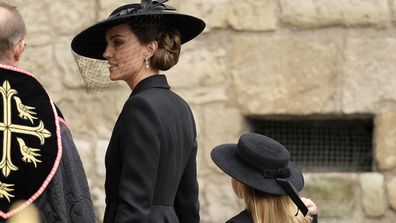