“I can’t believe the tornado was four years ago. It’s been an emotional rollercoaster, but it’s also been an amazing journey.”

“Thank you is just not enough. It’s not,” she said, shaking her head.

Not enough to reflect how profoundly thankful she and husband Todd feel.

“The number of people that reached out and supported us in one way or another. It was overwhelming,” said Todd Nicholson, tears filling his eyes.

Todd is a decorated and celebrated Paralympian. Emily is a former recreational therapist at CHEO and now a prominent accessibility advocate.

The Dunrobin family is back in their home, feeling indebted to so many for so much.

“It’s really amazing to see how many people will come together if you ask for help,” said Todd.

“And I just want them to know how thankful we truly are,” said Emily, her voice breaking.

The Nicholson’s weren’t in their home on Porcupine Trail when the tornado hit. They were out for dinner with their then nine-year-old twins Gwen and Tate when they noticed the weather changing that day.

“What comes back to me in terms of my memory was the black sky, this black marshmallow streak. And you could see things up in the air,” recalls Todd.

Traffic on Dunrobin Road was congested and blocked by debris. Emily jumped out of the car and ran to her street to check on neighbors and friends.

“I needed to get to our community because I knew that our neighbor’s children were home and I wanted to check in on them,” said a teary Emily.

“At that point, we didn’t know that we had lost almost everything,” said Todd.

Soon, they would see what was left of their home. The front wall was standing, but the rest of the building had been destroyed.

What remained of the Nicholsons’ family home on Porcupine Trail in Dunrobin after being destroyed by a tornado in 2018. (Supplied)

“We weren’t sure how much we could salvage or find,” said Todd.

The Dunrobin-Gatineau tornado last 40 minutes on Sept. 21, 2018. It traveled 40 kilometers, destroying or damaging more than 50 homes. More than 430,000 people were left without power for days.

The home of Todd’s brother in nearby Kinburn was also destroyed by the tornado.

One of the initial items to be salvaged from what remained of the Nicholson’s house was the family’s goldfish, ‘Happy’. A local firefighter and friend, Shaun Hunt, stood with Emily, while a member of his team retrieved the beloved pet.

Grasping the bowl, Emily stared at the ruins that had been her home, still coming to terms with the devastation around her.

“I was by myself on the street with Happy in his Goldfish bowl. And I was just thinking, ‘What do I do from here?’” she said. 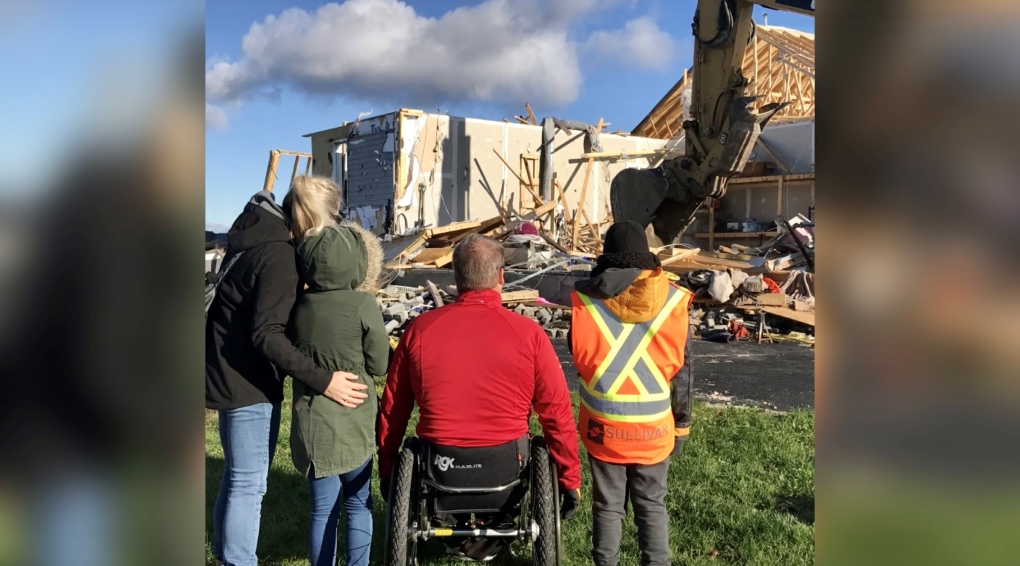 Emily Glossop-Nicholson, Todd Nicholson and their then 9-year-old twins Gwen and Tate view their Dunrobin home, destroyed by a tornado on Sept. 21, 2018. (Supplied)

There were no easy answers, but neighbors and friends opened homes to the family without one. The family stayed in several rooms, apartments, cottages and homes.

Todd, Emily, and their twins, Gwen and Tate, found comfort in small spaces and each other.

Along with contractors, giving family members and friends, the Nicholsons would help build portions of their fully accessible home. Emily became part of the work crew, doing drywall, stonework, and several other jobs to complete the build; the construction fueled not by dreams, but the nightmare of loss.

It was 499 days before they moved back into their rebuilt home.

“I feel extremely grateful that I did get to put that time into this house because it makes it feel more like mine in a way, even though it doesn’t feel like home just yet,” said Emily.

“At the same time, it’s tough. For most, building a home is a really exciting experience. For me it wasn’t. We had a home. We loved our home. So, to have to rebuild a house because of the one you lost, which we now call the broken house, it’s hard, it’s really hard,” she said.

However, four years after the tornado, as they move forward, the Nicholsons and even Happy the Goldfish, are learning to love their new home, too.

“It’s time to put a bow on one chapter and start another,” said Emily. 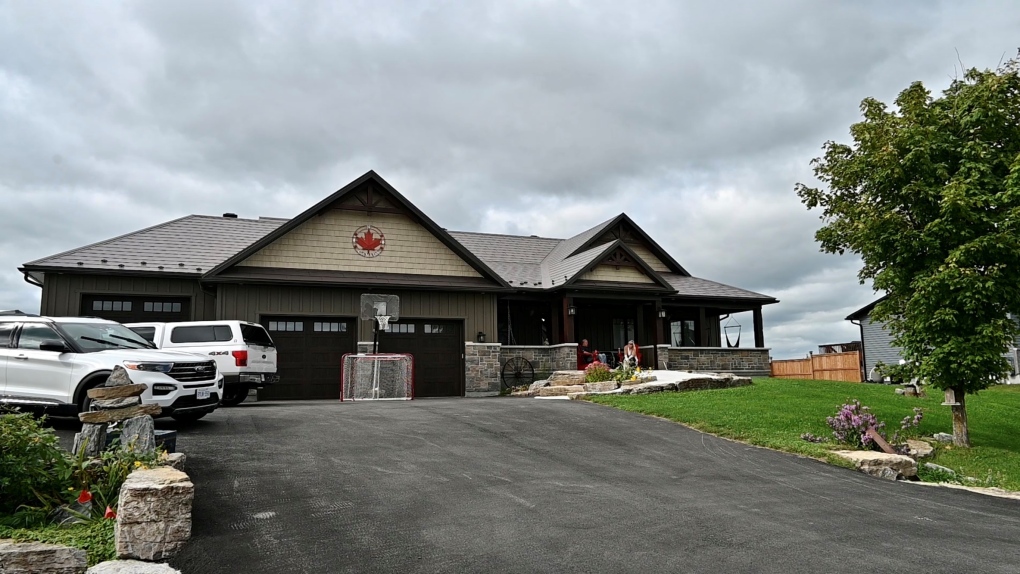 The Nicholsons’ rebuilt home on Porcupine Trail. The family stayed in various homes, apartments and cottages for 499 days before moving in to their new house. (Joel Haslam/CTV News Ottawa)

Today is World Gratitude Day and the Nicholsons are feeling especially grateful.

A wall of their new home is now known as the ‘Gratitude Wall’, covered in tiny hearts, each with a name written on it, and placed beside others in a frame. The wall honors ‘the helpers’ who helped the family find their way back.

“I’m extremely grateful that any time I picked up the phone and asked for help people would say ‘when do you need me,'” said Todd.

“Some of those people that are on that wall I haven’t seen since I was 12 or 13-years-old. But they offered support. We wouldn’t be in that house if it wasn’t for the people on the wall,” he said.

Throughout their journey, Emily has been writing a blog about the family’s experience. It was meant to be a way to keep family and friends up-to-date, but it soon led to a request from the Vanier Institute of the Family for the Nicholsons to write a book, based on their story.

The result is “Our Family is Grateful”, a children’s book telling the family’s tale of hope and resilience. The book is also the family’s “heartfelt expression of gratitude to all those people” who helped the Nicholson’s rebuild their lives. 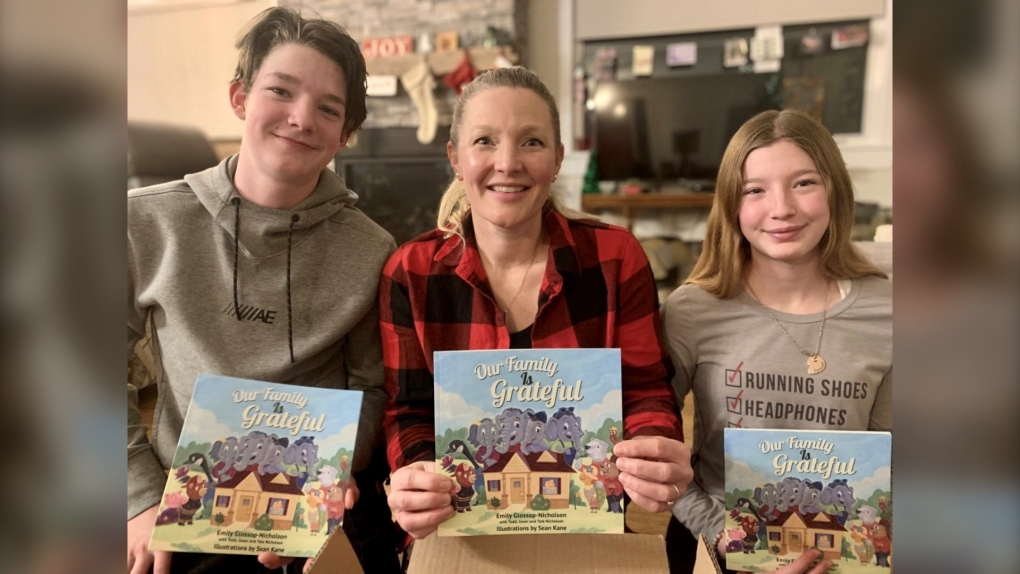 Tate Nicholson, Emily Glossop-Nicholson and Gwen Nicholson proudly display copies of “Our Family is Grateful”, a children’s book authored by the family. The book was written following a request from the Vanier Institute of the Family. The book has been gifted to all those who helped the Nicholsons during their journey and to children, communities and first responders who are using the book to help families deal with crises and challenging situations. (Supplied)

The book, available in English and French, has been gifted to others—communities, families, children and first responders—to be used as a tool to navigate challenging times. It’s a reminder that, even in crisis, we are never alone.

Section Chief Bill Bell of the Ottawa Fire Service calls it a “heartwarming, meaningful book.” He and other firefighters are sharing it with families in traumatic situations.

“They use the term ‘heroes’ for first responders but people like Emily and Todd, they’re our heroes. They’ve really risen like a phoenix from the ashes of disaster and turned something horrible into something positive,” said Bell.

“This book is already being used to help families through disasters,” he said.

A limited number of books were printed and there are very few copies left. Most were given as ‘thank you’ gifts to people who had helped the Nicholsons during their rebuild. Emily says the family may consider printing more books if they receive enough interest. You can request your copy by emailing [email protected]

Meanwhile, on this World Gratitude Day, Emily sits at her computer, making last-minute touches to her final blog.

Sitting alone in the basement of her family’s new home, she reads aloud the final paragraph; her words sealing one chapter and opening another.

“We are grateful to everyone who helped us along this journey. In my heart of hearts, this was my last project, to finish the rebuild and the last project on my list that I needed to complete before I could truly say, and I know the feeling will come, we’re home.”