LEGO is really trying to capture the first Avatar film in brick form as pre-orders are here for another set. Love is in the air this time as Jake and Neytiri are taking to the air as they ride on the Banshee across Pandora. The powerful Banshee comes to LEGO with two buildable creatures that come in at 10.5″ long and with a 12.5″ wide wingspan. The Banshees will feature posable foil wings and a display base to showcase them in flight. The Avatar mini-figures are larger than your average LEGO mini-figure, which is pretty cool, and glow in the dark blocks are also included. This one 572 piece set that Avatar fans will have a blast building, and it’ll prepare you for the films long-awaited sequel.

The banshee alien bird has got some sweet collectible reveals lately with sets like this and the massive figure McFarlane Toys is releasing. The wildlife was always a cool aspect of the Avatar films, so it’s nice to see some new collectibles showcasing them. The Avatar Jake & Neytiri’s First Banshee Flight Set is priced at $59.99, and they’re set to take flight in October 1, 2022. Pre-orders are already live here, and be sure to check out some of the other sets heading our way from LEGO. 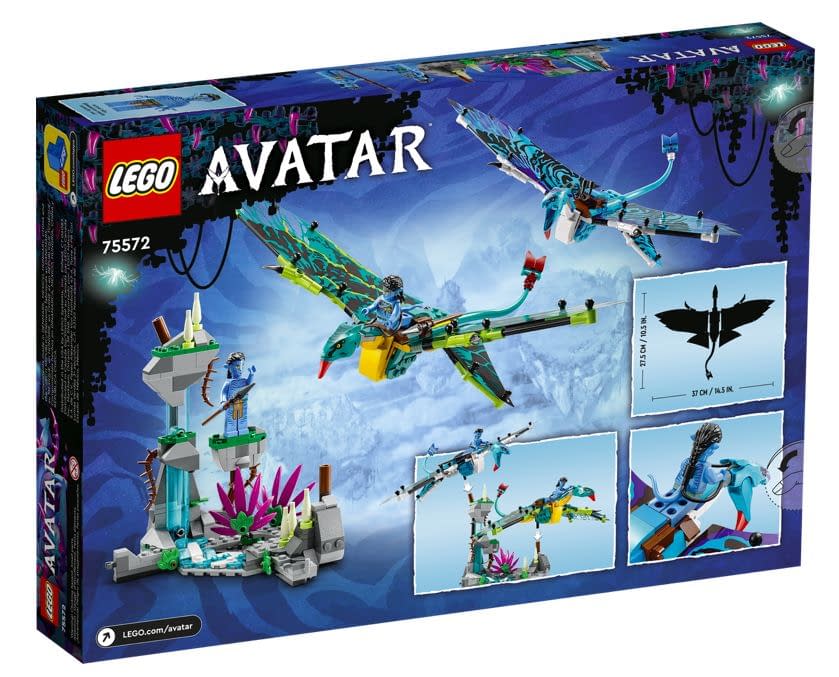 “Do you know an Avatar fan or child aged 9 and up who’s into nature and action? This LEGO® Avatar Jake & Neytiri’s First Banshee Flight (75572) building toy set will hit the spot. The playset includes Jake Sully and Neytiri minifigures, 2 posable Banshee (Ikran) figures, plus a section of the Hallelujah Mountains with glow-in-the-dark pieces.”

“Encourage a child or movie fan’s creativity with a set that reflects Pandora’s environment as kids and families play out favorite scenes or make new stories. Connect different sets (sold separately), to extend the play possibilities and build your own version of Pandora. Filled with iconic characters and well-known locations, LEGO Avatar sets give kids a fun play experience and exciting story options. The models also look great displayed on a shelf, with a detailed build made for posing a creature, so older fans can enjoy a joyful focus as they build the colorful universe.”