“A teacher affects eternity; he or she can never tell where their influence stops.” — Henry B. Adams

Long before social media, cell phones and Zoom meetings expanded the physical spaces between us, University of Southern Mississippi (USM) Professors Angela Ball and Jim Meade began establishing an in-person legacy cementing their reputations as among the best to hold forth in a classroom. at the institution.

Meade came to the USM Hattiesburg campus in 1971 to join the faculty of its then Department of Art, as an assistant professor, with Dr. Ball following at the close of the decade as a visiting instructor of English in 1979. Together they have logged nearly 100 years in classrooms at the institution, and this fall resisted yet again the siren call of retirement, returning to do what they love most – teaching and inspiring their students’ products on canvases and through the written word.

For Meade, the path in life that led to USM was not easy. He grew up in poverty, and the tragic deaths of close family members in his teenage years left him with the responsibility for three younger siblings. But he found great joy during that time as a Boy Scout in teaching the lessons of scouting to his younger cohorts in their quest for badges, along with working as a swimming instructor during the summer months. These experiences, he says, eventually revealed for him a career he felt suited for and wanted – that of an educator – and his passion for it has not waned, even in the autumn of his life.

After studying for two years at the University of Virginia-Wise, Meade transferred to East Tennessee State University, where he earned bachelor’s and master’s degrees in art before attaining an MFA from the University of Georgia. He has studied under established international artists, and his work has been on display in approximately 140 exhibitions, including 40 one-man shows and 17 overseas. He’s also lectured at universities in Asia and Europe.

As he pondered his job options upon approaching graduation at ETSU, one of Meade’s professors, Morton Brown, shared some sage advice.

“The real action in higher education is at the state universities,” Brown told him. “These kids heading to the elite private schools – Harvard, Yale, Princeton – they’ve got everything already – education, money, privilege. Even if they don’t graduate from college, they can fall back on their family’s wealth or make their way in life through their talent, political, and economic connections.

“The majority of our (ETSU) students are blue collar, working-class, first-generation college students much like those at other state (public) universities,” Brown continued. “These are the students working their way up from less privileged circumstances, and at these schools you get an opportunity to be a part of their success story.” 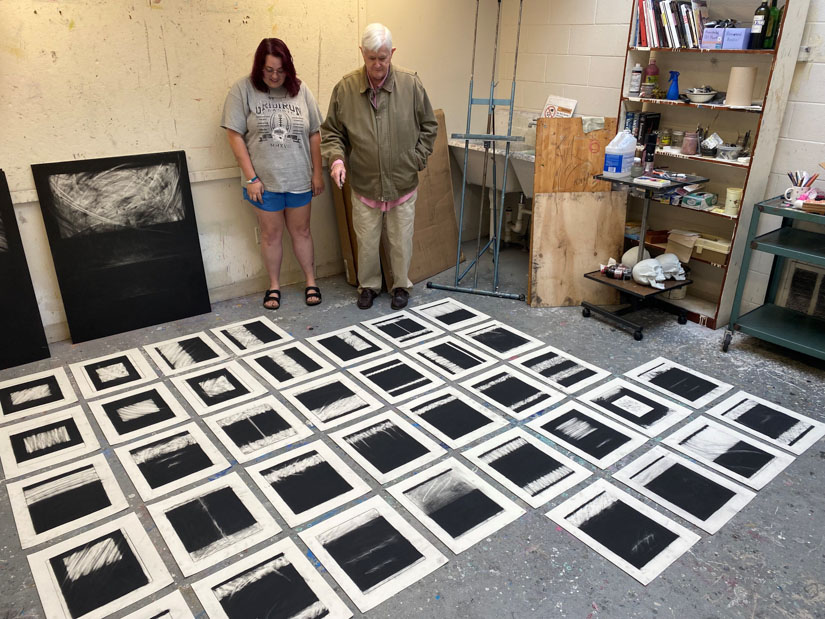 USM Art Professor Jim Meade confers with a USM art student about the collection of compositions she will include in her senior project.

Meade feels USM holds a similar profile, and he’s proud of his own students from the same kind of backgrounds who have gone on to paint self-portraits of success.

“Many of the kids I’ve taught here over the years are now living all around the world, enjoying interesting and rewarding careers in the arts,” he said. “It’s gratifying to see what they’ve accomplished.”

As for his teaching philosophy, Meade says it is important to “set the terms” for instruction and be “honest and consistent” with your students.

“Voltaire (the French philosopher) once said “Gentlemen, define your terms.’ Well, teaching is a kind of deviation of that expression,” Meade said. “As an educator, I believe you should define the terms that make up your instruction and stay within the boundaries of those terms. I spend a good bit of the first part of a semester defining the terms.”

From 2013 to 2015, Dr. Ball was USM’s Moorman Distinguished Professor of Humanities. Her extensive vita includes six volumes of poetry and hundreds of individual poems in prestigious publications such as the The New Yorker and the Atlantic Monthly. She has served as editor of the Mississippi Review and as a Poet-in-Residence at the University of Richmond; she’s been listed in Who’s Who of American Writers and Editors and included in the Best American Poetry anthologies. She earned the Susan B. Herron Award for highest ranked fellow by the Mississippi Arts Council, along with multiple awards from the Mississippi Institute of Arts and Letters.

“I’m as dumbfounded as anyone that I have been doing this for so long,” she said. “But I enjoy meeting the students and feel grateful every day for the immense variety of them that we have, both undergraduate and graduate students. It’s particularly great to see some who perhaps struggled in the past to open up, like slightly late blossoms, to reading and learning.

“I find if I encourage them to respond honestly to the readings, good things are bound to happen. There’s a constant back-and-forth of ideas and inspiration, most intensely with the graduate poets and writers, but also often with undergraduates.”

Dr. Ball recounts when, for an advanced composition class, she gave an assignment based on Studs Terkel’s book of interviews, Work. “A student in that class interviewed a sanitation worker, who at length extolled the virtues of his job: ‘Good pay and benefits, and best of all, you are always finding stuff! People throw out lots of valuable things.’ This is one of the best interviews I’ve read anywhere.”

It’s experiences like these and others that bring Dr. Ball back to the classroom, what she sees as opportunities to “get out of myself, be surprised, help, and learn.”

“I come back to get out of myself — to avoid a tendency to brood and/or feel sorry for myself,” she said. “My life, like most people’s, has had a measure of heartache and I would much rather hear my students’ poems, essays, and class discussion than give in to that.”

This past August, Dr. Ball taught an intersession class in world literature, and a student woke her up to a detail in a story she has taught several times, misreading it because she had previously ignored it.

“The same class was asked, on the example of Jamaica Kincaid’s brief story, “Girl,” to impersonate a parent giving harsh advice,” Dr. Ball continued. “A Black student read an inspired list of things to avoid doing as a young Black man, a list that ended up dauntingly long. The class responded with a burst of appreciative finger-snaps.”

And there’s nothing more satisfying for her as a teacher, she explains, than finding out a poem she’s helped a student edit has been published, or even an entire dissertation.

“But yet, maybe there is something more satisfying,” she reconsidered. “To see a light go on somewhere inside a student who has struggled with writing and sees, “Yes, I can say things simply and clearly.” 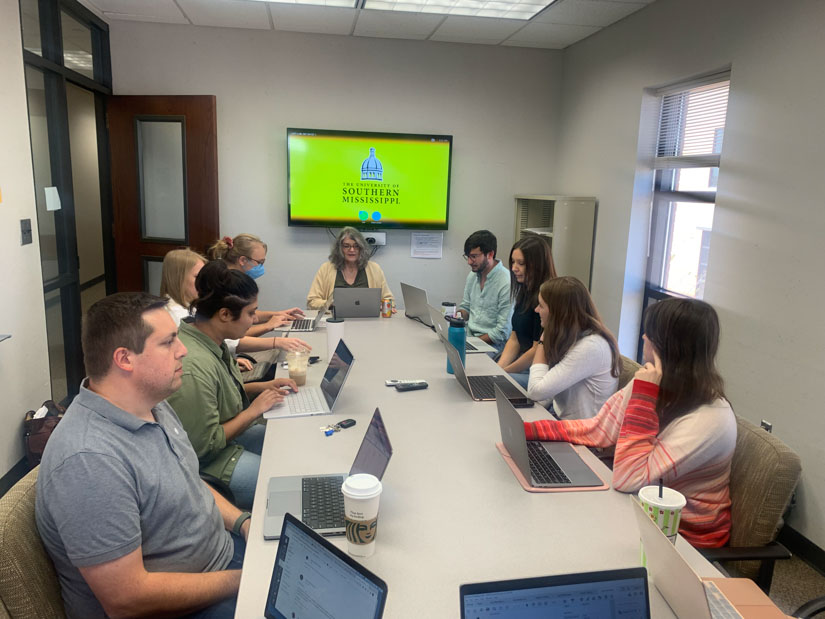 Kevin Walters, a Hattiesburg native and two-time graduate of USM who lives in Nashville, says a day does not go by that he’s not benefitted in some way — either directly or indirectly — from what he learned in the classes he took from Professors Ball and Meade.

“Professor Ball’s poetry classes — particularly those focusing on the work of poet Elizabeth Bishop — broadened my perspective about art, writing, and the world in ways I had never experienced before. Similarly, Professor Meade was the kind of instructor who enlightened you about the history of art, even as he pushed you to do more and better drawings yourself.

“I would be remiss if I did not mention their accomplishments outside the classrooms, and how their work as artists fed what they taught in their classes.”

Earlier this year, Meade and Dr. Ball were recognized for their years of service to the university in an event hosted by the USM Department of Human Resources, where Dr. Ball was presented a portrait of the Aubrey K. Lucas Administration Building, a gift signifying 40 or more years of service, along with induction into the university’s Centennial Legacy Circle; Meade was presented with his service pin for 50 years-plus as a faculty member. The ceremony had been delayed due to the COVID-19 gathering restrictions of the last two years.

“I so appreciated the lovely ceremony where the wonderful Jim Meade and I were recognized,” Dr. Ball said. “To be praised for doing what we love is indeed lucky.

“I will treasure the special portrait of the Dome given to me. In my imagination it is a portrait of me standing in front of a blackboard – or a white board – marveling at what my students have to say.”

USM President Emeritus Dr. Aubrey K. Lucas says he’s honored to count Meade and Dr. Ball as treasured colleagues and friends from their time together at the university.

“They’re both great artists and effective teachers, and certainly deserving to be honored for their exemplary work over the years as senior members of our faculty,” Dr. Lucas continued.

Reflecting on his half-century-plus career at USM, Meade has no regrets. “I wouldn’t change a thing,” he said, adding that he hasn’t set a date for calling it quits.

“I’ve done it for so long, I don’t think I can break the habit. I really can’t imagine doing anything else.”